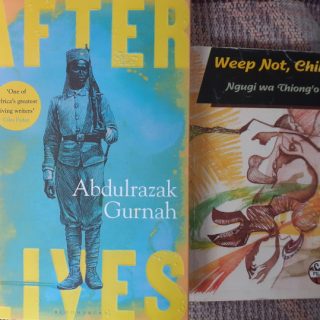 I’ve come to the conclusion I’m a fussy reader. As an historian, my reading material although narrowly focused on World War One in Africa varies between traditional academic texts to self-published ancestral memoirs, biographies and autobiographies as well as official reports and letters. This means I read widely in terms of style, accepting the document for what it is – a vessel to impart fact or interpretation that I can use to understand a particular event or circumstance.

As a publisher, however, I read a wide variety of texts and genres, many taking me out of my comfort zone. Similarly, belonging to a local reading group, I get to share thoughts on texts with others more comfortable with the fictional world. From this it’s become apparent that I much prefer what I call an authentic read – something original. I seldom read the blurb of a fictional book as that invariably puts me off reading the book. And another quirk is that I am trying to read my newly bought books in order with to be reads scattered throughout, so I seldom know what is coming along other than the title which peers up at me from the pile.

This random approach to my reading meant that I read two novels concerning the Great War in Africa one after the other with no preconception of that being the case. The one was brought to my attention soon after its publication – Afterlives by Abdulrazak Gurnah and the other Weep Not, Child by Ngugi wa Thiong’o. Both are by African authors and both by all accounts written while the authors were in England. However, despite the reviews which I have since caught a glimpse of claiming Afterlives being ‘entrancing storytelling and exquisite emotional precision’ (Evening Standard) and a ‘shatteringly powerful novel’ (The Notorious Reader), I found it a poor comparison in terms of tone and reader-captivity to Weep Not, Child – finding a review of the book might be a challenge as this first novel by Ngugi has been analysed by students with summary plots and interpretations available instead. Weep Not, Child was written in 1962, published in 1964, whilst Afterlives was published in 2020 – different political contexts and authors writing for different reasons and audiences.

What I love in Ngugi’s writing and which he hasn’t lost over the years is his African voice. He hasn’t tailored his writing to an audience that struggles with African imagery: A young boy walking along the road sees ‘devil’s water’, otherwise known as hallucinations; the First and Second World Wars are referred to as the Big Wars, first and second. ‘The road which ran along the land had no beginning and no end …’ are just a few. Sadly, his description of what happens in the classroom in terms of teaching English has little changed from what I saw regularly over a nine-year period first-hand in Tanzania 60 years later.

Abdulrazak’s writing is crafted, tailored to an audience removed from his home country (Tanzania) and continent and for me it’s lost this vibrancy. I was struggling to work out what the book was missing, why it hadn’t grabbed me until I was reading Ngugi and it hit me full-force. With Ngugi, I could smell his Africa (Kenya), sadly not with Abdulrazak. I had a similar experience reading Half a Yellow Sun by Nigerian Chimamanda Ngozi Adichie, another well-crafted text but something was missing.

And this is one of the aspects I love about being a small publisher – keeping the author’s authentic voice, writing for the minority who want to experience the world the author is trying to create, not the one the marketing gurus suggest people want to hear about. One of my favourite images is by Sudanese TSL author Amna Agib: ‘I always smell the sound of your drums’ (The Roots that gave birth to Magical Blossoms). And there are so many more, by authors from all walks of life and continents in the TSL catalogue.

While Afterlives did not transport me back to another time and place in the same way Weep Not, Child did, I take comfort in the fact that Abdulrazak’s topic and it’s positive reception by the critics raises the profile of those who were caught up in the Great War in Africa – and in particular from the German colonial experience.