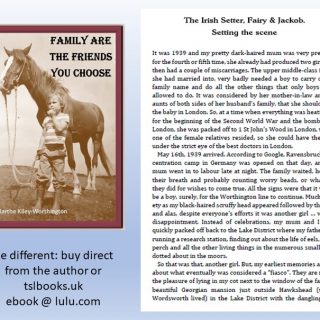 Some time ago, I saw mention that only 2% of the world’s population have green eyes. The majority have brown and 10% have blue.

Seeing this, I wondered how important it was for authors to specify their characters’ eye colour, so took a look through TSL’s books to see what authors have done. The result is below. Do you think it’s important to specify eye colour or should that be left to the reader’s imagination? Marthe Kylie-Worthington in Family are the Friends you Choose also questions authors focus on eyes.

The cat, Ginger, in Anna Ryland’s A Second Chance
Marla in Josie Arden’s Broken Ties of Time
Raphaela in The last rose of summer in This and That 2 by Josie Arden
Isabel in The Visit in Tea at the Opalaco by Jane Lockyer Willis
Fairytales and Oddities by Ezra Williams
Grey-green eyes feature in A Perfumed Holiday in Stuffed! by Johannes Kerkhoven
In a break from green eyes, brown eyes are mentioned in The Stillbirth Marriage in The Roots that gave Birth to Magical Blossoms by Amna Agib (Bit Nafisa)

Other books:
Doris Lessing’s lead character in The Summer before the Dark has brown eyes.

Marthe Kiley-Worthington was raised on farms in the UK, Kenya and Congo by her two-legged parents and four-legged friends and mentors. As a female at that time, she had few options. She became an ecologist and ethologist, and concentrated on trying to unravel the communication of her mentors, non-human mammals both wild and domestic, through research and adventures across Africa, Europe and the UK. She studied philosophy to better understand ideas for the further development of animal welfare science. Another post-graduate degree in equine and elephant epistemology (their knowledge of the world) ensued.
Marthe became very aware of the ethical, social, political, and biological problems of modern agriculture in the 70s and thereafter devoted her life to marry the theoretical with the practical to develop human and animal relationships and produce food without these problems. This Ecological Agriculture is modeled on how the ecosystem works. She trialed and developed the tenets on five ecological farms, making mistakes while developing techniques for future farming. She has written over 100 scientific papers, and 7 books.
Today, Marthe is internationally known for her work on animal welfare, ecological agriculture and understanding animal minds. In particular, how to put well thought out theories into practice, allowing for the ecological controls and conflicting interests of all.

You can see more about Marthe on her website.

Some links of interest:
Interview
Circus documentary
We Are all mammals
WWOOFers