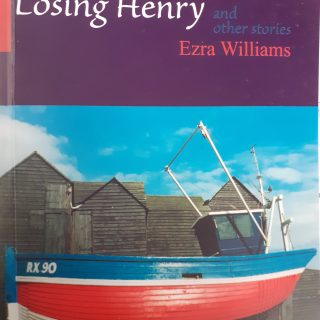 Losing Henry is Ezra’s first published book of short stories. Published in 2007, 14 years before Fairytales and Oddities, it is a very different book to the latter.
The stories are more grounded, less abstract and a few have the same characters appearing. I’m not one for reading titles (or blurbs) – I prefer to get straight into a story so was rather surprised that having read two different stories about losing Henry, the one I thought was to be the title story wasn’t.

Both Ezra’s books are well crafted and written, depicting states of mind which is not surprising given the decade plus between the books. In their own way, they are commentaries of the societies of the time – I’m tempted to say London society but that is too specific, and British is too broad, so read them yourself and decide.

Don’t always expect a happy ending – life is not like that and that’s a trait of Ezra’s writing. He’s not afraid to tackle the darker side of life (or taboos for that matter). He pushes the boundaries – more so in Fairytales and Oddities than in Losing Henry.

TSL has published various collections of short stories – from the more traditional by Josie Arden, through to quaint English with a twist in Tea at the Opalaco (Jane Lockyer Willis) to activism and social change (Sue Hampton and Amna Agib). Nick Horgan and Johannes Kerkhoven have their own niche as does John Samson‘s Cold Fiction inspired by the album Cold Fact.

Of these, Losing Henry aligns most with Stuffed! while for ‘off the wallness’ and abstractness, Cold Fiction and Fairytales and Oddities take prime position.

If you would like to purchase a copy of Losing Henry, please contact TSL Publications so arrangements can be made… all other books are available through the links above.