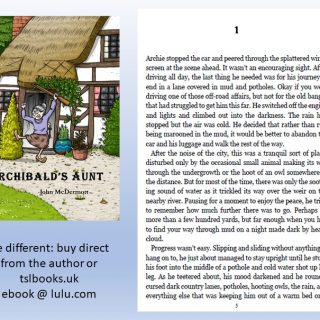 John McDermott was born in Liverpool in 1925 where he attended school till age 15 when he left to work for ICI.
After moving to Cheshire in 1951 he met and married Marjorie who gave him six wonderful children.
John has always had an interest in literature, having been brought up in a house where Dickens, H.G. Wells and P.G. Wodehouse were borrowed regularly from the local library. P.G. Wodehouse was a particular favourite and his sort of humour makes occasional appearances in John’s stories.

Chris, John’s eldest son, has inherited the literary gene and not only writes but acts and directs as well. You can see more about John’s and his script writing at www.murdermysteryplayers.co.uk.