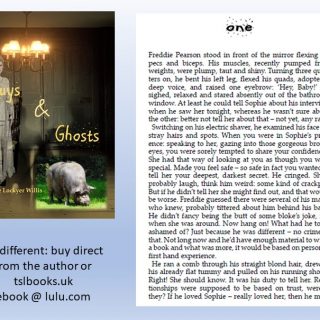 Some time ago, I saw mention that only 2% of the world’s population have green eyes. The majority have brown and 10% have blue.

Seeing this, I wondered how important it was for authors to specify their characters’ eye colour, so took a look through TSL’s books to see what authors have done. The result is below. Do you think it’s important to specify eye colour or should that be left to the reader’s imagination? Marthe Kylie-Worthington in Family are the Friends you Choose also questions authors focus on eyes.

The cat, Ginger, in Anna Ryland’s A Second Chance
Marla in Josie Arden’s Broken Ties of Time
Raphaela in The last rose of summer in This and That 2 by Josie Arden
Isabel in The Visit in Tea at the Opalaco by Jane Lockyer Willis
Fairytales and Oddities by Ezra Williams
Grey-green eyes feature in A Perfumed Holiday in Stuffed! by Johannes Kerkhoven
In a break from green eyes, brown eyes are mentioned in The Stillbirth Marriage in The Roots that gave Birth to Magical Blossoms by Amna Agib (Bit Nafisa)

Other books:
Doris Lessing’s lead character in The Summer before the Dark has brown eyes.

Jane grew up in Warwickshire before moving to London to study English, Speech and Drama at The Guildhall School of Music and Drama:
Past experience includes the stage, amateur and professional; acting in plays for BBC World Service Radio and teaching. For many years she ran her own company, Speakwell Communications, offering tuition to adults in modulation, pronunciation, and presentation skills.
Jane has written a number of stage and audio plays, some of which have been performed here and abroad.
In 2018, Jane’s play Plaza Suite came 4th in the Barnet Drama Festival and together with Bryan Hourihane won the Comedy Award for their portrayal of Mr & Mrs Hubley, the stressed out parents of Mimsie, the bride who won’t come out from the bathroom.
In 2020 Jane won highly commended for a short play called VISIONS

Her short stories have won The Irene Swarbrick Award, the John Walter Award twice, and for poetry, The Elizabeth Longford Award. Jane’s poetry has been performed on Loud Voices Silent Streets. In 2021, Jane’s poem SHIFTING SANDS was published by The Alzheimers Society.
Jane’s short story The Adorable Mr Finch was Story of the Month on StoryStar in August 2021.

Review of Cocoa and Cuddles

Indulge in short stories with Jane

Why not get a taste of her short stories at
Story Star and then indulge with Tea at the Opalaco (it also makes an ideal gift).
And if you want something a little longer, try Guys and Ghosts.
I haven’t yet been disappointed in a story by Jane.