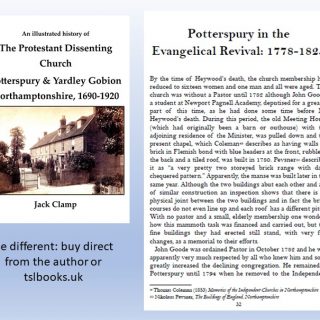 Jack Clamp was born in New Bradwell, Bucks in 1928. After a period as an instrument maker and service in the Royal Signals as a radio mechanic, he became a teacher in 1959 at what is now known as the Radcliffe School, Wolverton. Whilst there he obtained a Diploma in Education from London University and in 1971 was appointed Deputy Headteacher at the County Primary School, Potterspury, Northamptonshire. He became Headteacher in 1974 and remained there until his retirement in 1988.
Other titles include:
A School for Potterspury (1989)
A Brief Narrative of the Rise and Progress of the Independent Church at Potterspury (1992)