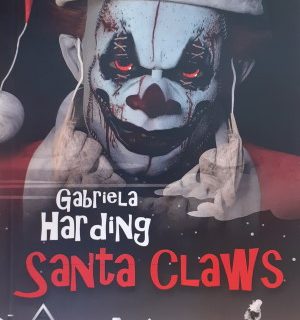 Santa Claws: A dark tale of Christmas by Gabriela Harding was a fascinating read.
A step or more outside my comfort zone, fantasy and horror, it appealed to my appreciation of difference. Clever twists and unusual takes on the ordinary.

This is a trait of Gabriela’s writing – the twists and turns, obscuring the norm. Before reading Santa Claws, a novel, I had encountered Gabriela’s short stories in the collection Sai-Ko which TSL published. That too, is not my usual reading material but as with Santa, each story is carefully crafted. All individual with a common theme – dark and twisted – running through.

I’m not sure Santa Claws is a young person’s book, perhaps better suited for teens able to handle the gore and suspense. And hopefully, the underlying moral and ethical messages concerning relationships and life in general filter though. While younger readers might well appreciate Santa Claws, Sai-Ko is most definitely adult material.

Be bold, step out of your comfort zone and have a read. Both titles are available at TSL (click on image below) or from Gabriela herself.

A letter from Gabriela Harding to Emilies

This week I sat at my desk and wrote a speech on bullying. I was invited to an event – a book fair – where besides signing books and meeting a bunch of interesting authors, illustrators and publishers, I planned to do something inspirational: talk to young adults about coping with the dark reality of bullying.

Arriving at the church hall, I was Alladin walking into a wondrous cave: all around me was the smell of freshly printed books, paper and ink, and the crescendo of so many cultured voices was the best music I could hope for. Somewhere in between a war veteran selling his memoirs and a widely published author of twenty five children’s books, was a stall bearing my name. And, even if instead of setting up all I wanted to do was do a round of all the other stalls and buy everything in sight, for a moment I stopped and thought.

I thought of the friends who made me feel as if I’d never achieve anything. Twenty years ago, I would myself have laughed at the thought of walking into a hall where my own books would be sold, in a stylish London suburb. That I’d be a wife and mother, own my own West London flat, and have REAL friends would have sounded like impossible dreams. Just the thought of it would make my bullies roll on the floor in fits of laughter. Yes, they were that nasty. But I bet none of them is laughing now, not because they’re awed that I’ve made something of myself, but because they’ve forgotten all about me. They moved on to the next weak victim; I’m no longer a target; not to THOSE bullies anyway.

The twelve year old me would have been enchanted by the vision of a future where she meant something. It’s in memory of her that I’m writing this blog post.

Graduating from University, my confidence was still shaken after failing to find a job in the elitist Bucharest workforce. I moved to London from the naive belief that the West offered justice, equality and protection from the bully dragons. And after yet another failure, I sank into the deepest pit of despair. Maybe THEY had been right. Maybe I was really worthless, and they simply had the insight to see it straight away.

What I didn’t understand was that my fight with the bullies had not ended. In fact, it was only just beginning; I’d never had the confidence to challenge them before. And victims never win.

I still recall the feeling of devastation when, barely two years after my wedding, I walked the streets of London looking for something – anything – to distract me from the loss that was eating me inside. I had not only lost my best friend, but also the little confidence I had, my dignity; I was running a knife through a centuries-old web of traditional marriages. I would always remain the first woman in my family to get divorced.

I’ll always remember that year. I was twenty five years old. It was the year I started writing professionally. You see, writing stories is even better than reading them. I’d never feel lonely or empty again. Storytelling was my miraculous gift. As long as I had a story inside me, I was both immortal and invincible.

To quote one of my favourite authors,

“Miracles are like meatballs, because nobody can exactly agree on what they are made of, where they come from, or how often they should appear.”

I joined a writing group. As I read my first story aloud, I felt my head would explode – but I found that there, between the cozy, book lined walls of the local library, no one misunderstood my words. No one thought I was different, or inadequate. I was accepted for who I was. And accepting myself came as easy as my next story.

As I was setting up my stall, Emily came to my mind. When she approached me, I felt like talking to the old me – the teenager I have so much to apologise for.

For not believing in her. For forcing her to conform. For not listening to her voice.

Our conversation brought back a whole lot of memories from my own school days, when I was ridden with the constant guilt of not belonging. Her fears were mine; so was her shine – the hope and strength born from courage and injustice. It makes it so much easier for bullies to target you when you’re different. No matter your talent, whether you’re a writer, an artist, a musician, if you have something that the world doesn’t understand, you are put under scrutiny and made to feel like the fish who couldn’t climb the wall.

What I told this young girl – who, by the way, is a talented, award winning dancer – I told her that, actually, it’s okay to be different. Being different is not being inadequate. I warned her that, sadly, bullying won’t necessarily stop at school. Everywhere you go, you’ll have to deal with people who make it their life goal to belittle you – people who will see you through the ugliness inside them. Whether you’re thirteen or thirty five, you’ll have to fight them off with your core strength, the same thing that they’re attempting to weaken in their mean and mediocre ways. Whether it’s your talent, your faith or simply the gift of kindness, this is what lifts you above them. And this is something you must remember, dear Emilies.

You’re above them. Remember your worth. And remember THEIRS.

I have a message for the bullies, too. Envisage this.

You’re alone on a stage, in the crude spotlight. The spotlight is not something you love. You may be small, but you have good instincts, and they tell you that you’re not something people want to see. Your comfort lies in the dark dusty rat holes. You love shadows and corners. But now, the holes are blocked, all the corners flooded by light. The only door you want open – the exit door – is bolted.

And then the audience you failed to entertain starts booing.

Breaking through the crowd is more difficult than you think. You wish you were just another face in the crowd. As part of a gang, you were powerful. But because your friends are exactly like you, you sink alone. You have nothing to give. You crouch somewhere. A snail out of its shell: spineless, defenseless, small.

And then you realise with horror that you stand in a shadow – the shadow of a foot. You look horrified into your own monstrous face. You barely have time to register your fate before the foot makes a sickening crunching sound.

‘Santa Claws’ is a story about coming of age – a tale about a girl who learns that things get better only to get worse again. Just like night follows day, so do unfortunate events follow moments of happiness. Tragedies are pearls of wisdom meant to strengthen and teach us.

I model my female heroines, such as mischievous Honey Raymond, or Eliza Vissarion in my new young adult novel, on myself as a teen – a time I sometimes feel trapped into. I’ve never really lost the zest, the courage, the spirit of rebellion or the hunger for adventure; these are things that help me go back in time and speak with my fourteen year old voice. Honey and Eliza are characters who start off by feeling inadequate, only to find their own better way in the world. They are curious and question everything, especially authority and stupid rules. Not surprisingly, perhaps, they turn into adults like me, wanderers and dreamers, fighting battles not for the taste of power, but in the spirit of justice. The feeling of being separate will stay with them for a lifetime. They’ll learn to embrace it.

And they’ll be forever fighting evil monsters. After all, what would stories be like without monsters?

Thanks to Gabriela Harding for sharing her talk with TSL readers.

Gabriela currently lives in London, is married and has a young son. This is her first book of short stories. Gabriela’s first published book book is Santa Claws, a book for young people aged 13+ about bullying. She is currently writing a crime novel. You can read more about Gabriela here.