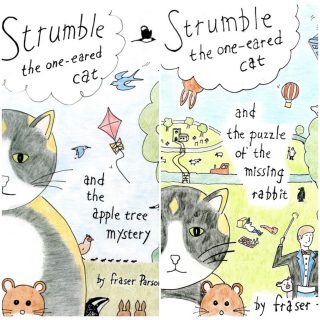 Fraser was born in Caerleon, Monmouthshire, a small town with interesting Roman remains and home to the nearby Celtic Manor golf course.
In 1980 he graduated with a degree in Economics from Swansea University. He then started work as a computer programmer/analyst at a life assurance company in High Wycombe. It was here he met Amanda, his future wife and they still live in The Chilterns.
Fraser was diagnosed with Parkinson’s in 2001, age 42. He’s always enjoyed drawing and as a child used to copy cartoons out of papers and magazines and then started to draw his own.
In 2000 they adopted a small stray cat with a big personality. She had one and a half ears and they named her Strumble. She was the inspiration for Fraser writing 2 children’s books which he got printed and then sold to raise funds for Parkinson’s UK. He is currently working on a third book.
He has illustrated a book of poems by Judy Theobald which also raised money for Parkinson’s UK.
His interests include photography, walking, listening to music and setting music intro quizzes. He also plays walking football, and occasionally table tennis. He is a member of the Chiltern Film Society and his favourite TV show is ‘Mock the Week’.

All royalties will be donated to the Amersham and Wycombe Branch of Parkinson’s UK to help support local people with Parkinson’s as well as to support research and a cure for Parkinson’s.