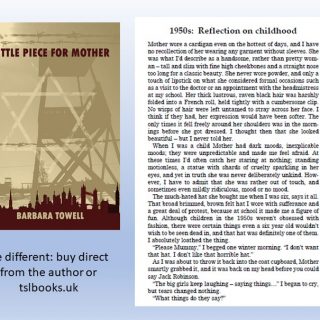 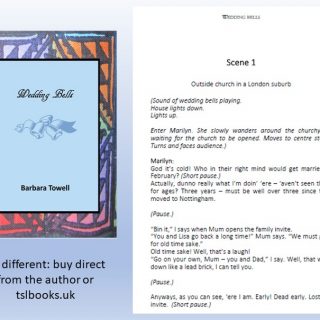 Barbara is an English and Drama teacher as well as being the author of the successful international novel A Little Piece for Mother.
She has published work in many genres. With her husband John, she wrote the musical Faith is the Key; staged both in Harrow and during the Dumfries Festival in Scotland.
Her other published works include: Patchworks; – a poetry anthology, articles in national magazines and some years ago she sold a series of children’s short stories to Dial-a-Telephone Story. In 2013, she was lucky enough to win the Harrow Libraries’ crime writing competition and prior to that, won the Harrow Millennium Carol Writing Competition. Although she has written, directed and performed in many productions, Wedding Bells; is her first play to be published.
Barbara co-leads the Pinner Writers’ Group, is editor of The Pylon magazine, the Parish magazine of St John Fisher, North Harrow.
You can find other poems and articles by Barbara in Sixtyplusurfers magazine as well as in The Lady and by the beginning of February 2021 she had won the monthly Harrow Times Poetry Corner competition four times.
In January 2021, she won 1st prize in the Pinner Writers’ crime short story competition judged by international crime writer, Leigh Russell. On the winning story ‘Erin’, Leigh Russell wrote:’This story had an unusual and original perspective. It was immediate, really taking readers inside the character’s thoughts. This is a writer who understands how to show, not tell. It is powerful writing, thought-provoking and haunting.’